On June 13th, 2020 in Racibórz, and in the presence of Poland’s President Andrzej Duda, a ceremonial construction termination of an anti-flood reservoir on the Odra river took place.

We are proud to inform that our company has participated in this ambitious project. We have installed and programmed the central control and visualization system.

On June 26th, 2020, as the leader of a consortium, Introl Energomontaż along with Ferox Energy Systems signed another contract

for a new cogeneration plant construction project in Jelenia Góra.

The new plant will have 8MW of electrical and 7.5 MW of thermal power.

The project will reduce the CO2 emissions in Jelenia Góra.

During the first part of the event, the representatives of the government of the Republic of Poland confirmed the determination of our country to develop the nuclear energy sector as fast as possible and American companies which are leading in this sector declared to support this initiative and showed great openness to cooperation with specialist companies from Poland.

The Introl Group was introduced to Bechtel, Westinghouse, General Electric and Emerson in the second part of the Forum during bilateral talks. Current successes of our capital group made a very positive impression on the American guests and the presented companies were considered as perfect contractors of the ancillary systems.

CONSTRUCTION OF A HEAT AND POWER PLANT IN MIŃSK MAZOWIECKI 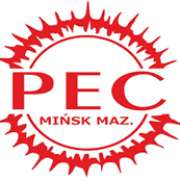 The subject of the Agreement is a complex construction of a gas heat and power plant (EC) located in Mińsk Mazowiecki, equipped with two high performance gas cogeneration units, each with the following output parameters: electric power of ca. 3.3 MW and heat power of ca. 3.1 MW and heat accumulator with capacity of approx. 38.2 GJ. The heat and power plant shall be powered with methane-rich gas (E-type). Produced electricity will be transferred to the electricity transmission grid of the distribution system operator using 15kV cable line. Produced heat will be transferred to the heating grid. Planned investment completion date: 06.2020. 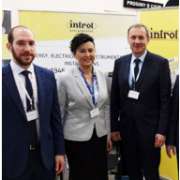 VIII Technical Conference in Rybnik – Modern Heat Plants and Heat and Power Plants. On 17-18 January in Rybnik, there was a technical conference devoted to the theme of cogeneration. Introl-Energomontaż, as a company having long experience and strong position in this sector, took an active part in it. Our employee, Paweł Kozak, gave a speech.

The presentation at the beginning was supposed to shortly introduce the Introl Group and its leading Company – Introl Energomontaż, which offers services from the energy sector. The presentation touched the topic of gas cogeneration and possibility of its execution on the basis of different technologies. Exemplary analyses of cost-effectiveness were shown for systems based on gas reciprocating engines and the topic of the real engines’ efficiency was mentioned, which slightly differ from the levels shown in the leaflets of the units’ manufacturers. Basing on the exemplary chart of structured demand on heat, the ideas of engine selection for ordinary heat plants were shown and the problem of irregularity of daily demand on HUW in summer was discussed. The work concept of a small heat accumulator with a gas engine as a source of heat was shown on the example of investment executed by Introl Energomontaż. Some reference facilities of the Introl-Energomontaż company were also introduced.

WE ARE IN THE PROCESS OF INVESTMENT EXECUTION IN ECO MALBORK 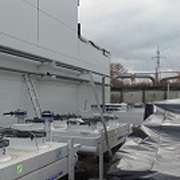 The investment of ECO Malbork covers the housing of two electric power generators with soundproof rooms.
The building consists of:

The engine is powered by natural gas.
Engine properties:
Manufacturer: Jenbacher, type: JMS 612GS-N.LC
Electric power with 100% load: 2004 kV
Heat power to use together with heat reception from the combustion: 1909 kV.

The following technological systems constitute a part of engine’s operation: 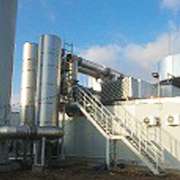 The subject of the entire investment is the housing of two electric power generators in a designed technological building. The building consists of the following rooms:

Cogeneration generators will be located in soundproof rooms.
The engines will be powered by GZ-50 natural gas.
The generator unit will include: